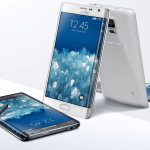 Samsung Galaxy Note 5 is considered to be the most stylish, sleekest and the jumbo sized smartphone made by Samsung ever. Galaxy Note 5 was released in August, 2015. It is much improved as compared to Note 4. The style and appearance of Note 5 is much appealing.

Galaxy Note 5 is famous for its jumbo sized feature. The display size is 5.7inch with 2560×1440 pixels resolution. The main elements included in the construction of Note 5 was glass and metal that provides a different look to this smartphone. The phone is 7.6mm thick and weighs 171grams. Just like S6, it is a flat screen smartphone but there is something interesting in it that is its edges are slightly curved from the back of the phone. The back side curves make it look more stylish and easy to grab in hand.
The display size is 5.7inches but it is designed in such a way that you can hold it in one hand easily. The physical home button not just there to open the home but it also contains fingerprint sensors. Power and lock buttons are on the right side while volume keys are on the left side.The bottom side contains a standard USB charger port, headset jacks and S Pen holder.

The S pen stylus is made up of polycarbonate plastic. This plastic pen has long, flat planes that keep it from rolling on a table top. With the use of S pen you can use to pull a dialog box, a photo or video. Samsung claims that this time S pen works much better than before and it was lighter than the S pen of Galaxy Note 4.

The Samsung Galaxy Note 5 runs the latest Android version 5.1 lollipop. Thestandard features of lollipop such as Google now, access to Google Drive files etc. are available in this device also. In addition to other features latest S health app is also pre-installed in Note 5.

The rear camera of Note 5 is 16 megapixel while the front camera is 5 megapixel. Samsung has adopted aperture lens f1.9 which is the same one used in S6 and S6 edge. It is good because big aperture lens let you take better pictures especially in low lights. So if you take picture in low light with your Galaxy Note 5 you will see a big difference the image will be much better than before.

More features included in the Note 5 are as follows:

Screen off memo is a new feature that was introduced in Note 5. It can provide facility to write quick note even when the screen is off. It works with the use of S pen. For instant memo you will need to set it in the settings.

Now you can write on the PDF documents or edit it as you edit the screenshots.

Note 5 include shortcut wheels that is easily editable, so you can edit it by your own choice. Shortcuts for emails, quick messaging etc. are included in the wheels. It gives a stylish appearance on screen.