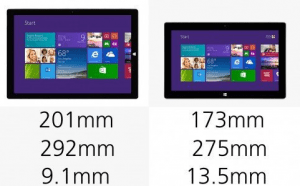 The screen of Microsoft pro 3 is larger than previous model. It comprises of a 12 inch diagonal clear full high definition screen resolution that abandons previous aspect ratio of 16:9 of surface pro 2 for a more unique 3:2 aspect ratio. This actually marks an increase in screen size as compared to 10.6 inch screen of surface pro 2. But it is not just the screen size that make surface pro 3 to stand out. This tablet also packs 2160 by 1440p compared the 1920 by 1080p of surface pro 2. This means that users will get to enjoy highest contrast ratio that the electronic industry has to offer.

Speaker are often neglected in tablets and laptop probably under the notion that they are never going to sound good but that is not the case with surface pro 3. Microsoft has made major improvement in speaker quality of surface pro 3. It is 45% louder than its predecessor. The speaker are located in front to enable the user to experience quality sound.

One of the most significant improvement that Microsoft has made in surface pro 3 is its battery life. According to Microsoft, surface pro 3 offer up to 20% better stamina than any table available to date. However, a test that was conducted to test battery durability of surface pro 2 to that of pro 3 found out that pro 2 battery actually last 10 minutes longer than pro 3. However, there is no reason get upset about this result because surface pro 3 as more additional features that consumer more power.

Although both surface pro 2 and 3 uses the same generation of processors- the haswell processors, surface pro 3 has core i7 CPU which is more powerful than that of pro 2 which uses Intel core i5-4200 chip.

What has remain the same?

Tech improvement and size changes aside, most of the core ideas of surface pro 3 has actually been borrowed from surface pro 2. In addition both of them have an integrated kickstand and an active pen stylus.

So which one is better.