Coin Sized Disk Can Hold the 360 TB Data for Billions of Years. We all know the commonly used data storage devices like hard disks, USB drives, SSDs etc. These storage media will be able to store a few hundreds of gigabytes or may be some terabytes. The 5D data storage is a revolutionary idea which could change the face of data storage devices as we know it. The 5D storage technology is something the researchers from Southampton University developed recently. The beauty of 5D storage is that it can store terabytes of data. The device is a disc shaped object. It can hold 360 terabytes of data in a single disc. These discs have only the size of a coin. Imagine 360 TB data in a size of not more than a coin. That’s what 5D storage disc is. 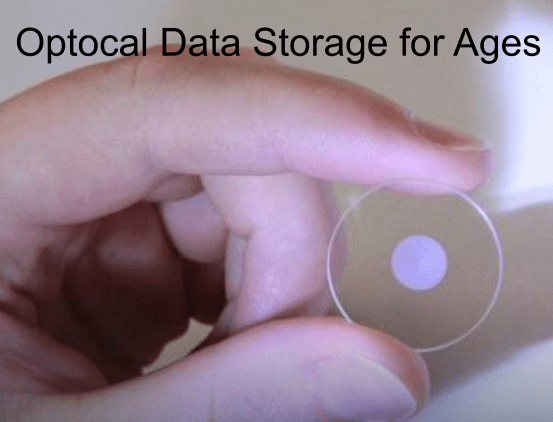 The data will be safe for billions of years. We know that existing data storage devices will get damaged sooner or later. Back in the day, magnetic storage media used to lose data faster due to the physical damage of the magnetic tapes. Even though the scenario improved over time, the present storage devices also gets damaged over time. We can’t expect them to hold our precious data forever. Timely upgrade is required is we want to keep the data safe. So 5D storage, if and when it becomes accessible and affordable to common consumers, will solve the problem of data loss. 5D discs can keep the data stored in it intact for 13 billion years if it is kept at room temperature. We will never face a situation where we need to store data for billions of years. But the fact that it can hold the data for that much time proves that data storage technology just took a great leap forward into the future.

We have hearing the term 3D (which stands for three dimensional) a lot these days. We know about 3D movies and animations. But we have never heard about anything 3D in case of storage devices, let alone 5D. So what exactly is a 5D storage method and how it works? Let’s compare the technology to the old compact disc (CD). In CDs, we are using a laser light to store data. It will create small bumps in the disc which is read as a 1 (one) in the digital communication method. If there is no bump, then it is a zero. Now this method is two dimensional, since there is only two modes – zero and one. In a 5D disc, there are three different layers of nano grating. These gratings can change the way light is reflected from the disc. We are using light for both reading and writing data. So since there are three micro layers in the storage device, totally there are five modes in 5D disc, hence the name. The data stored in optical devices, whether it is a CD, Blue ray or a 5D disc, is read by striking light to the surface. So whenever a light is struck on 5D disc, the reflection will depend on the three layers of the 5D disc and thus we are able to encode highly dense data inside the disc.