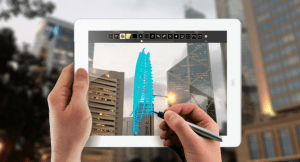 Advancements in technologies have meant there isn’t a huge difference between a tablet and a computer, these days. The arrival of Apple’s iPad Pro has narrowed this gap even further. In fact, Apple goes on to say that this device has it all that can replace your good old laptop. Given its price and features, this tall claim doesn’t seem surprising too many. The real hero in Apple’s iPad Pro’s case is its A9X chip that brings the device on-par with the abilities of a lower end MacBook. But it is the apps, and not just the chips, that will finally have a say on how good a device is.

Among first things that will strike you when you come across an iPad Pro are the Smart Keyboard and the Apple Pencil. Though the Smart Keyboard is, in itself, a wonderful concept, the technology behind the Apple Pencil is what will take you by surprise. The sensors used in this tiny device enable the user to mimic the physics behind the real pencil. The angle and pressure of your strokes is what makes the difference in using this pencil. The given below apps that truly make your iPad Pro special are sure to take full advantage of the brilliant stylus that the Apple Pencil is.

Apple just doesn’t want to coax you into buying things through its platform, but it lets you learn through them as well. The education app, iTunes U, which is nothing less than a wonder, lets you select among hundreds of courses and interact with the instructors in the real time. Besides this rich feature, users can also dig into an ecosystem of TV shows, apps, music, podcasts, books, and movies. You’ll be better off opening Evernote at the same time as you may be required to take down notes as and when required.

Video editors, no matter how skillful they are, would surely love to have bigger screen to work along. The good news with Apple’s iPad Pro is that it fits the bill easily, at least in this regard. It’s not just the large canvas; even the processor of the device shines and enables the user to edit videos just like that.

The AutoCAD 360 mobile app is the mobile-friendly version of CAD, an application that helps users to mock up object in the real-world. Whether you’re looking to 3D models or a series of 2D profiles, this app will let you create and edit all of them with ease. Also, in using the Apple Pencil, the user can bring out his/her creativity on to the screen easily and beautifully.

There are quite a few creative and wonderful apps Adobe has created, and most of those can be used superbly on iPad Pro. Photoshop Sketch and Illustrator Draw are among those apps that let users express their visual ideas easily on to the screen with the help of Apple Pencil. If you already have existing images, then consider using Photoshop Fix and Lightroom to make them even better. However, you need to know that having an account with Adobe Creative Cloud is a must, if you want to make the best use of these apps.

When you work around with Evernote on your iPad Pro with Apple Pencil, life gets simplified to a large extent. While Evernote will let you jolt down your notes and ideas and enable you to sync them across different devices, the Apple device lets you use the app as if it is your magical cloud notebook!

You may be quite familiar with this medical educational app if you’ve been using Apple Keynote. Basically, this app let’s medical students as well as others interested to study human anatomy, a chance to study various organs and bones that make us who we are. The super-quick processor coupled with the large screen of iPad Pro makes it even lively experience of watching all the details before you.

If you’re a coder, you’re sure to love this app as it will allow you to create and edit codes even when you’re on the go. Whether it is Python, JavaScript or HTML; all of them and more can be edited easily through iPad Pro. Besides the enhanced viewing experience for the user on Pro’s large screen, the Split View lets the coder do the coding on one side while previewing its impact on Safari at the other end.

With iPad Pro, you can easily make 3D models through uMake and have them exported to a desired location. If you are an artist, you’ll find this app easy to work with on iPad Pro as it has a large screen and a fast processor, besides the Apple Pencil that makes it easier to sketch the models beautifully.

The technology behind Todoist has simplified your life to a great extent that there’s nothing stopping you in upping your productivity levels. With Todoist app at your disposal on your iPad Pro, you can see the bigger picture of things you need to be doing and their timings. The reminders will keep coming to keep you updated about the tasks on hand.

Though there are quite a few productivity apps from Apply itself, nothing can really beat the PowerPoint, Word and Microsoft Excel. With these enterprise favorite applications on your Apple iPad, you can continue working on them as you were on a PC since a long time. Also, if you have a Smart Keyboard and Apple Pencil at your disposal, there’s nothing stopping you from making the best use of these applications.